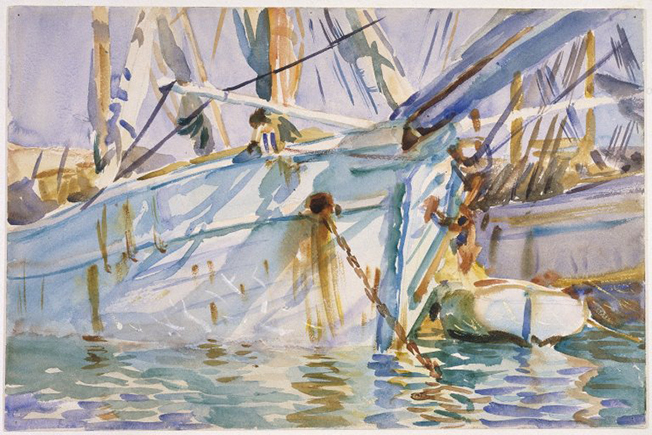 John Singer Sargent was an amazingly skilled artist. He had remarkable technical ability. He could capture light and reflection brilliantly and quickly. He was known as one of the finest portrait painters of his time, but also painted a good number of landscapes and other works.

There are so many amazing Sargent pieces to choose from! Let’s start with this one…

Capturing light, shadow and reflection like that, in watercolor… ain’t easy. In fact, his ability to see all that and translate it into paint (probably on site) just boggles my mind. I love the colors in this piece, the subtle water blue and green and the cool shadows. Step back a ways and you might be looking at a photograph. Look close and every stroke is quick and assured. Wow.

From The Metropolitan Museum of Art:

The family of John Singer Sargent (1856–1925) had deep roots in New England. His grandfather, Winthrop Sargent IV, descended from one of the oldest colonial families, had failed in the merchant-shipping business in Gloucester, Massachusetts, and had moved his family to Philadelphia. There, his son Fitzwilliam Sargent became a physician and in 1850 married Mary Newbold Singer, daughter of a successful local merchant. The couple left Philadelphia for Europe in late summer 1854, seeking a healthful climate and a distraction after the death a year earlier of their firstborn child. The Sargents’ stay in Europe was meant to be temporary, but they became expatriates, passing winters in Florence, Rome, or Nice and summers in the Alps or other cooler regions. Their son John was born in Florence in January 1856.

One of Sargent’s best known works was also one of his most controversial, Madam X. Certainly sounds like a title designed to provoke. By today’s standards, the portrait, painted for the great Salon exhibition in Paris, seems pretty tame. But in 1884, it caused a great scandal! It was considered risqué, portraying a woman in a low cut, sleeveless dress with… a hanging shoulder strap (mon Dieu!). Sargent’s reputation, and that of the sitter, was tarnished for a while. But his superior skill certainly overcame that. (And the scandalous shoulder strap was eventually repainted).

One Response to John Singer Sargent