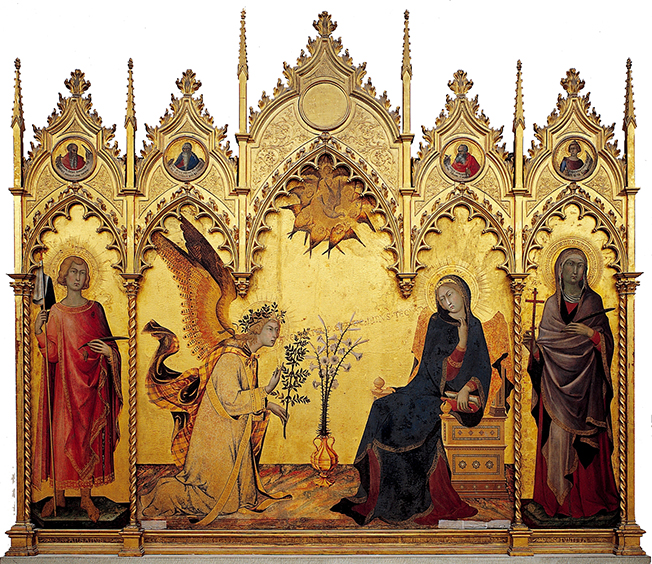 Consider this… there’s some really neat stuff happening in these oldies. I’m not a religious guy, or advocating any particular faith, but Christianity produced a boatload of amazing art over the years, and this piece is one of them. It’s an altarpiece made in 1333 for the cathedral in Siena, Italy, by Simone Martini and Lippo Memmi (gotta love that name!). It stands about 8 feet high and is plastered with gold leaf. It’s subject matter is the Christian Annuciation, when an angel from heaven came to tell Mary she was about to be in a family way. Let’s take a close look…

To begin with, it’s a striking image. Mary is recoiling in a sort of “what the?” pose as the angel delivers the news. There’s a neat, almost comic book approach to his message, as it is spelled out in latin words emanating from his (he’s the angel Gabriel) mouth. He says, “Hail, thou that art highly favored, the Lord is with thee: blessed art thou among women.” She doesn’t look too happy about it. I think I’d be a tad surprised if it were me.

That cluster of birds above is actually a cluster of little angels (cherubim, or putti in Italian). They have bird bodies and angel heads, and surround the dove from heaven. The dove will (amazingly) enter Mary’s ear to conceive the child. I’m not well versed in the story, but there you go.

Curious stuff, but I’m not mocking it… I think it’s fascinating to get inside the 14th century mindset when you look at something like this. It is wonderfully painted and has held up well for 681 years. It was very important to many, many people of that time. Still is.

Here’s a nice Kahn Academy piece on this work. The video gets into some of the symbolism contained in the piece.

There’s a lot of gold leaf here. All that gold you see is actual gold metal, hammered very thin and applied with a type of glue. It was used a lot in those days, and didn’t come cheaply. I’ve tried to use it and it is very unwieldy. It’s so thin that the slightest puff sends it flying, and it breaks into pieces very easily. Guilders used  a thin, flat brush to pick up the pieces and lay them onto the glued surface. Here’s a really detailed article on how it worked. And here is a great YouTube video, also by Kahn Academy, on the process. Take a look and see how flimsy the gold really is!

That elaborate frame was probably not part of the original. It was added nearly 500 years later.

And… the burnishing tool the guilders used to smooth out all that gold was commonly made of a dog’s or a wolf’s tooth.

← A Walk in The Garden with Paul Klee
John Singer Sargent →