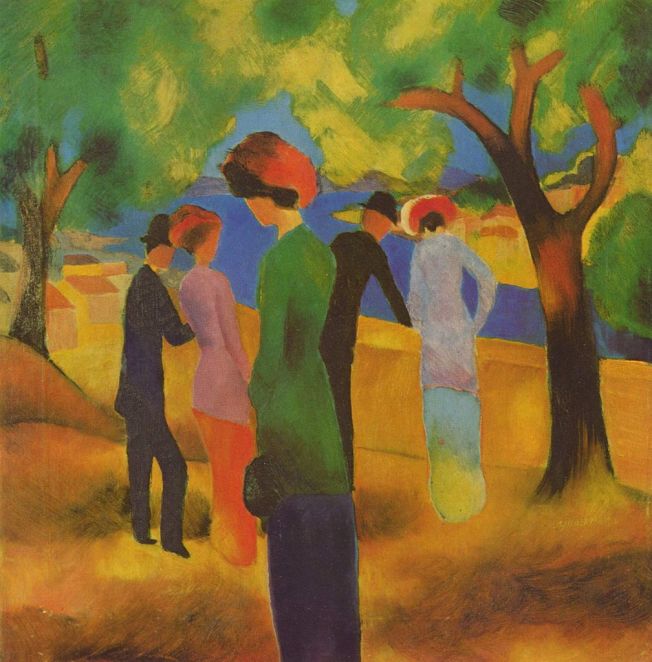 August Macke’s art is a perfect embodiment of the avant-garde of the early 1900’s. He had a wonderful mix of color, abstraction and subject matter that made him a good fit for many of the “isms” of the time – Expressionism, Fauveism, Cubism, Futurism. Nevermind what all those are. Point is, he made some really nice stuff.

One of the reasons I started Better With Art is to prompt my self to look into artists I’ve never really explored. August Macke is one of them, and I’m thrilled with what I see. Bold colors, stylized forms, and lots of interesting and experimental work done over his short life time.

For me this painting captures a look and feel of the time. Artists were experimenting with shape, form and color, and this piece would have been considered pretty wild at the time. Picasso and Braque were working what they saw in to blocky cube shapes (Cubism). Matisse and Derain were using bold, bright colors (Fauvism). Expressionists were bending and distorting the world with inventive compositions portraying their unique vision. All of this, and more, seems to come together in Macke’s work.

Tragically, Macke was killed fighting in World War I – only two months after the war had begun. In his short 27 years, he had produced many pieces, and befriended many of the artists now considered greats, including: Kandinsky, Franz Marc, Delaunay, Paul Klee, and others. Sorry to name drop… suffice to say he was in the midst of a lot of great goings on.

Macke was yet another artist influenced by Japanese prints. Macke’s father was an amateur artist, and the young August was also influenced by his drawings.

← It’s all Hieroglyphics to me…
Artists in Film: “Renoir” →